Join us we celebrate one of FDNY’s many firehouses/stations that house NYC’s Bravest.

Ladder 102 proudly serves the neighborhoods of Bedford-Stuyvesant, Williamsburg and Clinton Hill. Its nickname “The Bedford Express” comes from the location of its quarters at 850 Bedford Avenue. Ladder 102’s current rig is a 2017 Ferrara with a 100-foot rear mount aerial ladder. Ladder 102 is also one of the few single ladder companies in the city that does not share its quarters with an Engine Company. Previously it did share its quarters with Engine 209 until May of 2003 when Engine 209 was disbanded. 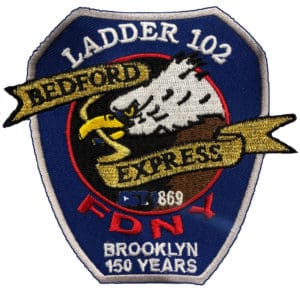